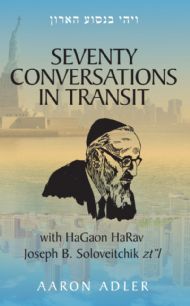 Rabbi Aaron Adler, a communal rabbi and rosh yeshivah living in Israel, attended Yeshiva University as a student. While there, he had the privilege of serving as Rabbi Joseph B. Soloveitchik’s driver, transporting him weekly from La Guardia Airport to Yeshiva. In this charming and edifying book, Rabbi Adler records some of the conversations he had with “the Rav” during these trips and the relationship they developed. These discussions relate to halachah, teaching and studying Torah, the wellbeing of Israel and the Jewish people, lessons in ethics, and more “mundane” topics, revealing a more personal dimension of a scholar known for his demanding intellect. This book is also a fulfillment of the Talmud’s directive that “even the ordinary conversation of Torah scholars require analysis” (Sukkah 21b). Rabbi Adler ably draws out the implications of the Rav’s comments and provides the context necessary to understand the chiddush in the Rav’s views.

The Gemara derives the importance of attentiveness to even the ordinary conversation of a talmid chacham from a verse in Tehillim (1:4): “He is like a tree planted beside streams of water, which yields its fruit in season, whose foliage never fades, and whatever it produces thrives.” A generation has gone by since the Rav’s passing but, as this volume demonstrates, his words continue to produce fruit, and his towering persona continues to provide shade.